Yesterday (May 19, 2010), I attended a meeting that discussed Albuquerques long-term plan for bikeways, trailways and other non-automotive infrastructure improvements (ABQ Bike Map [PDF]).

The Albuquerque Bikeways and Trails Master Plan Update is a series of meeting that will be occurring throughout the next year. They will be a series of discussions about the future of Albuquerque’s bike and trail network.

The meeting yesterday took place at a library (Erna Ferguson Library for all you Burqueños). The format of the meeting was really good. Instead of some city officials just telling the citizens what they were going to do with our tax dollars, there were a series of interactive workshops. These workshops were staffed by the members of the consulting group hired by City of Albuquerque, Gannett Fleming West Inc. This consulting firm has teamed up with another firm, Alta Planning and Design. The people associated with this group, based in Portland OR, seemed to really understand how to create a comprehensive bike and trail network.

I remember one of the consultants from Alta discussing Albuquerque’s potential to be a world class bike city. He listed these reasons:
1. Mild year-round weather
2. Lots of sunshine
3. A consistent grid-based street system (at least in the Northeast Heights)
4. Relatively flat terrain
5. The current existence of some great bike network elements

I have to say, the plan they have is pretty good and comprehensive. If they could fast-track many of these projects, I could see the mode share of bikes increasing by a large amount. 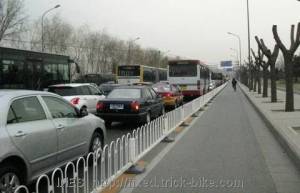 However, this will only occur if there are incentives not to drive instituted as well. Currently, Albuquerque, like the vast majority of American cities, is filled with developments surrounded by large free parking lots. As the great Donald Shoup once said, “There is no such thing as free parking.” We all pay the costs of an automobile oriented built society. These costs include high bike and pedestrian fatality rates and long distances between places.

Having great bike infrastructure is essential, but in some ways, good planning and land use should be far more crucial long term goals.