I have not posted for a long time. This has been due to the fact that I have been extremely busy working at the ABQ Ride offices and preparing to study abroad in Alcala de Henares, España.

This summer, I had a paid internship at ABQ Ride. During my time there, I managed to accomplish my major goal: to resign the ABQ Ride System Map. To give you an idea of the major changes I made to the system map, here is the old one:

As you can see, it is hard to read, cluttered and complicated. Here is my new one:

If you want a direct link to the map on the ABQ Ride website, here is the location.

My priorities for the revised map were an easy to read key and cleaner, less cluttered lines. Another priority I had was showing a better distinction between the lower frequency routes and the higher frequency routes.

Interestingly enough, almost as soon as I was done with the new map, Jarrett Walker of Human Transit wrote a great post about the importance of frequency-based transit maps. Local blogger John P. of Carfree in ‘Burque wrote a post in response to the Human Transit post; it included an ABQ Ride Frequency Map. Johns map happened to include many of the elements I added to the new map. This entire situation highlights the potential power of the interconnected Internet to influence ideas and policy.

Though I admit my new map is not perfect, it was the best I could do with the time and resources provided to me.

In addition, this summer I also created 4 other ABQ Ride maps for each of the major system transfer/transit centers: Alvarado, Uptown, Northwest and Central & Unser. Other than the Alvarado map, none of these maps previously existed in any form. I hope these documents can help people more easily navigate the ABQ Ride system.

This summer, I learned many things about life in the office, transit planning, politics, bureaucracy, transit funding, the City of Albuquerque, ABQ Ride and many other things. There is one very important point I would like to write about at this juncture; it is a major difference between the transit system in Tucson (SunTran, which serves an average of 13,534 daily riders) and ABQ Ride (which serves an average of 7,948 daily riders).*

Since both metro areas have a very similar population (and similar demographic indicators as well), one would expect similar ridership. What gives?

Local geography helps to explain the differences: in Albuquerque, the city is divided up by 2 major interstates (1-25 and I-40) + Paseo del Norte + the Rio Grande river basin; in Tucson, the street grid is relatively well connected, with the only major freeway (I-10) skirting the edge of town.

There is also another reason for the difference:

Tucson has a single REGIONAL transportation system. This means that there is one service provider for all the local transportation needs. This makes sense, as Tucson is a relatively small isolated metropolis.

Albuquerque, on the other hand has both a REGIONAL and LOCAL transit provider: ABQ Ride is local, while Rio Metro (the group running the Rail Runner) is regional. This means that funding is DIVIDED between these separate agencies.

How can Albuquerque expect to create a seamless, efficient network when the cash is split up between two different agencies? Though this issue may not be the deciding factor behind the ridership differences in these two cities, I believe it is an important issue that should be discussed by local leaders. After all, I’m not sure Tucson would have received federal dollars for their modern streetcar project without the unified force of a REGIONAL transportation system.

This was my major observation about ABQ Ride vs. Tucson/Suntran vs. regionalism/localism vs. transit networks in general. 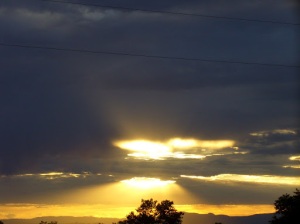 Anyways, that all has come to an end and I am now in Spain. I will be here for the remainder of the year, studying Spanish and other assorted things. I will try to blog as often as possible, but I will be studying full time so we shall see.

So, as always, IT’S TIME FOR A TRANSPORTATION REVOLUTION!

*All the data used was acquired from the Brookings Institute website from the interactive State of Metropolitan America Indicator Map. If you have not played around with this incredible interactive data set DO SO NOW! It is chock full of interesting, interactive demographic data from across the United States. Have fun!