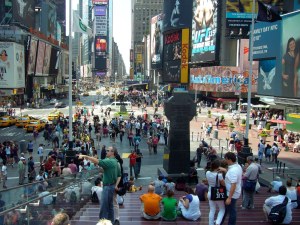 Yesterday, I spent the day touring New York City. I saw many interesting bits of urbanism, from the World Trade Center construction site (which, after years of delays, is finally being reconstructed) to the High Line (an old raised urban railroad that has now been turned into a spectacular park/public space).

New York City is a place like no other, especially in the context of America. Its density and population is unrivaled by any other urban area in these United States. It’s transit system is not only extensive, but it is also used by a majority of the population. The city has recently received positive attention from the urban planning world as a result of the new planning director in NYC Janette Sadik-Khan. Her new policies on creating bike friendly and pedestrian friendly infrastructure have caught the eye of planners across the globe. 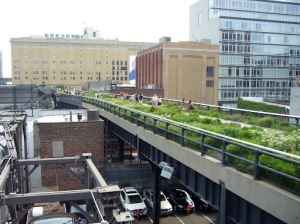 When I visit places like NYC, I try to figure out what exactly makes the city such an interesting and desirable place, both to live in and to visit. Parts of the answer may be obvious (such as Central Park), but some aspects of the city seem like true turn-offs. The streets are filled with speeding, stinky cars. The subway stations are old, dirty and hot. The traffic is terrible, and it is almost impossible to find one peaceful, quiet spot in the entire city.

For people who live there, the simple answer might be employment. But in my opinion, time is the thing that truly makes this place fascinating.

Since people have been living on this little island for such a long time, layers and layers of culture, history and urbanism have been created over time. One could walk for 3 blocks and hear 20 different languages, We were sung to by an African-American trio on the subway (they were pretty talented). There were 4 different bands playing at one single relatively small park we visited (Washington Square Park).

This kind of culture can not be created overnight.

The people who argue about the urban/surburban divide never touch on the issue of time. Cities are usually more interesting places than suburbs simply because the cities have existed for a longer amount of time.

Mix of use is also incredibly crucial. When buildings have a mix of uses (basically residential + anything else) they allow people more options about where they live and work. This allows for a variety of transportation options: walking, biking, roller-blading, skateboarding, bus riding, train riding or even automobile driving. People are always clamoring for more options in life; auto dependent development does NOT provide many options.

Overall, time has led to the creation of city filled with layers. It has layers of culture and layers of infrastructure. It is an organically growing place with constant movement and evolution. Some call it the City that Never Sleeps. What allows the city to stay awake all night?

How can we create incredible places such as NYC? Time is one very important ingredient.