April 6: First Tucson Transit Task Force Meeting – I met with small group of people from the Living Streets Alliance and from other local groups to brainstorm a strategy for addressing issues of transit funding, expansion and awareness. I learned much about the history of transit in Tucson, from the relationships between the various governing agencies down to the relationships between bus drivers and riders.

The primary reason for our meeting was the discussion of proposed transit fare increases that will be enacted within the coming months. Basically, SunTran has two options: 1) increase fares or 2) cut routes. Increased fares seems like best option but this can sometimes lead to less people using the service, creating even less efficiency overall. However, the propposed fare increases are relatively small and they are probably a better alternative to cutting service.*

Another big discussion topic was the relationship between SunTran and the university. The proposed fare increases would have the most dramatic effect on the discounted annual U-Pass for University of Arizona students. After the meeting was over, it was clear that the future of quality transit in Tucson depended on a close relationship between the university and SunTran. I will continue to drive home this important point within this group.

Last year, I prepared a presentation/proposal for free transit in Tucson for university students. This is a common policy in college towns across the nation, including my home town of Albuquerque. I tried to push my message for a few months but it always fell onto deaf ears. Now, with this new task force, I have a better opportunity to create constructive dialogue with the university.

Imagine Greater Tucson is a rapidly growing, community-based effort dedicated to protecting and enhancing our quality of life in the greater Tucson region. Our goal is involve the people of greater Tucson in creating a shared vision for our region’s future, and catalyze the development of strategies to realize this vision. 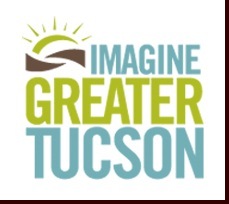 What does this mean? I had a hard time deciphering it. The event and presentation was interesting but not very groundbreaking. The concepts presented were commonly understood regional goals, such as job growth and quality education. All the attendees appeared to be passionate individuals with a lot of great ideas on how to improve the direction of growth in the Tucson/Pima County region. However, they presented no possible methods that could be used to accomplish the goals they presented. Apparently, these issues will be resolved in future community meetings. Only time will tell.

April 8: Featured on Tucson Velo – As previously discussed, the geovisualization created by my project group and I, “UA Campus Bicycle Geovisualization”, appeared on local bike blog Tucson Velo. It was a well written post and I thank Mike for posting our unique Google mashup.

Thanks for reading and feel free to write comments. The more feedback I receive, the better.

*If you are personally interested in the bus fare increases, here is a list of the current fares and the proposed fares. The decision on these increases will be made at a City Council meeting next week. More information on this meeting can be found here.

One thought on “Tucson Transit Task Force and Imagine Greater Tucson: Methods of Shaping Our Future”

Dog Days of Summer
Meet Bode! 🐶
“It’s better than it was before!” someone said to me, & I agree. @paintforpeace505, y’all KILLED IT. Amazing job making #downtownabq feel alive again.
2020 might be #canceled but that didn’t stop Sara & I from celebrating our anniversary.
%d bloggers like this:
%d bloggers like this: